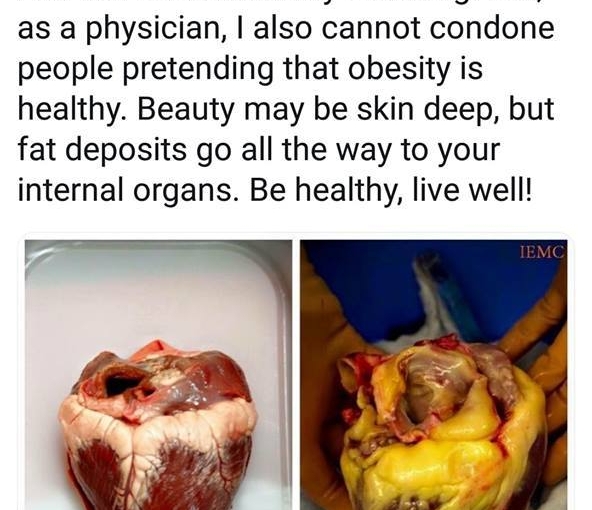 I recently came across a tweet that had a picture that we often use here at Soldierfit for a visual of the fat that really matters – visceral. In the accompanying text, the doctor touches on the the absurdity of fat shaming while at the same time pointing out that as a physcian he cannot pretend the health risk associated with obesiety do not exist.

There is no doubt about it, being overweight or obese poses serious health risk to the individual. Still we have to ask, is it any of our bussiness to address it? The answer, especially if we end up going to a universal health care model, is pretty straight forward.

“One of the most cited economic impacts of the obesity epidemic is on direct medical spending. Obesity is linked with higher risk for several serious health conditions, such as hypertension, type 2 diabetes, hypercholesterolemia, coronary heart disease (CHD), stroke, asthma, and arthritis. Direct medical spending on diagnosis and treatment of these conditions, therefore, is likely to increase with rising obesity levels. Several studies offer retrospective or prospective estimates of the degree of disease incidence that can be linked to obesity, and of the magnitude of associated direct medical costs.”-https://www.ncbi.nlm.nih.gov/pmc/articles/PMC3047996/

The reality (that everyone knows) is that we have an obesity epidimic in our country. The rates have doubled since 1970. Two-thirds of our country is now overweight. Even without universal health care it still affects all of us in some shape or form.

It can drive up insurance cost for companies.

It can afffect family members who have to deal with the ramifications of the onset of obesity related health concerns.

Hell, it even affects our national defense. The United States military has cited it as a major national security issue because it reduces the capabilites of recruits and those who are already in armed services.

The truth is, being obese isn’t a solitary issue. It spreads to your circle. But let’s be super clear about one thing. That does not now, nor will it ever, condone fat shaming.

You simply can’t lift anyone up while putting them down.

However, that doesn’t mean that we can continue as a nation, as fitness profesionals, and as parents avoid the hard conversation with those we love and with ourselves.

Our choices are killing us.

Each and every day we make a choice with our mouth and our body. And sadly for the majority of Americans, we are choosing to move less and eat more. The worst part of this is that we continue to make this choice despite the overwhelming amount of research that we are killing ourselves.

My challenge to everyone who reads this is to have that hard conversation with yourself first. Then start making changes in your own life. Once you do, or if you are already there, start mentoring someone you love.

Prove to them that you care by investing in them. As someone who used to be almost 300 lbs, who has struggled with his weight his entire life, I know the trepidation many face walking into a gym. Just because someone is overweight doesn’t mean they are lazy. Hell, some of the hardest workers I have ever met are overweight.

Still, if we are to ever make a change as a nation and as individuals we need to be able to say the hard truth without worry of being accused of fat shaming.
So I say now to everyone, what I once said to myself:
It’s a shame that we are fat.

Not because it makes us worth less, matter of fact it’s because of the exact opposite.

Our lives are worth so much more.